Skip to main content
Shailesh Vara proposals to reform Parliament and make its processes and procedures fit for the 21st century.

Mr. Shailesh Vara (North-West Cambridgeshire) (Con): I congratulate the hon. Member for Stoke-on-Trent, Central (Mark Fisher) on securing this debate and on his contribution. I would like to put on the record the valuable work that he has done prior to this debate. He was the founder of, and then an assiduous contributor to the cross-party efforts of, Parliament First, which for some time has been advocating reform of how we do our business. Among its publications was a report in April 2003, "Parliament's Last Chance". While the title may have seemed a little apocalyptic at the time, perhaps with hindsight the sentiments were not so wrong.

May I also congratulate the hon. Member for Cannock Chase (Dr. Wright) and all the other members of the Reform of the House of Commons Committee on their efforts in producing their report, especially given the relatively short time they had to do it?

In the wake of revelations concerning Members' allowances and expenses, Parliament's reputation has reached a low ebb. Therefore, any proposals for reform must be considered in the light of enhancing public confidence in Parliament and its Members. The revelations shattered many people's faith in our political system, but it is fair to say that the cracks in our institution had been growing for many years.

Before touching on the report's specific recommendations, it is worth highlighting the Government's record to date. I am happy to give credit where it is due. On the constitutional front, the Scottish Parliament and Welsh Assembly have received widespread support, and there is some expectation that the Northern Ireland Assembly will help to deliver a lasting peace settlement. The Freedom of Information Act 2000 has helped to make Parliament and the Executive more open and accountable, while some of the working practices of the Commons have been brought up to 21st-century standards, certainly in terms of being in tune with modern family life. Those changes are welcome, and if we were in government we would keep them.

However, welcome though those changes are, and leaving devolution aside, the changes introduced since 1997 have not substantially changed the relationship between Parliament and the Executive. In fact, they have tilted it in favour of the Executive. For example, we have the use of the automatic guillotine, control by the Whips of nominations to Select Committees, unacceptable delays in obtaining timely and proper replies from Ministers when Members ask oral and written questions, and regular briefings to the media on statements before a word has been uttered in the House-for example, today's announcement by the Defence Secretary.

Martin Salter: Will the hon. Gentleman give way?

Mr. Vara: I am afraid I will not. As I have very limited time, I must press on.

The Defence Secretary briefed the "Today" programme prior to a statement. The Freedom of Information Act has helped, but there is still much more that needs to be done before we can truly say that we are connecting with the public.

A week after the Prime Minister's coronation in July 2007, he spoke of entrusting

He also spoke of reducing the power of the Executive and of increasing their accountability. Those fine words were of course welcomed by all, but as has happened so often, the Government simply failed to follow through. Even the reforms we are discussing today are not from a Government initiative. Instead, they stem from a letter written by the hon. Member for Cannock Chase to the Prime Minister in which he suggested setting up the Reform of the House of Commons Committee.

The absence of any genuine desire for reform is also illustrated by the shambles that is the Modernisation Committee, which has not met for 18 months. As well as being chaired by a Minister, one of its last actions was to force through proposals for Regional Select Committees. That was done despite the objections of the Opposition parties; they were forced through on the casting vote of the Leader of the House.

For example, in May my right hon. Friend the Leader of the Opposition made a speech in which he stressed the need for Select Committee Members and Chairmen to be elected. Select Committees are an important part of parliamentary scrutiny, but the undue influence of party Whips on membership is a matter of concern. The last time reform in this area was seriously pressed was in 2003 by the late Robin Cook, who was then Leader of the House. He was outmanoeuvred by his own party Whips and voted down in the House on a recommendation of the Modernisation Committee, of which he was Chairman.

We agree that Deputy Speakers should be elected, and we look forward to considering the Procedure Committee's recommendations in the not too distant future.

The proposals regarding petitions are especially welcome and long overdue. Again, they follow proposals previously made by my right hon. Friend the Leader of the Opposition. Other more radical comments regarding the triggering of debate or legislation after a certain number of signatures have been received are also welcome. The Committee is right to caution against the effect that such changes may have on the operation of the House, but, if implemented correctly, they would help in the process of reconnecting the Commons with the public.

However, we would go further. We have specifically said that we would introduce citizens' initiatives: if a petition to Parliament secures 100,000 signatures, there should be a formal debate, and if members of the public are backed by a petition of 1 million electors, they should be able to table a Bill to be presented and voted on in Parliament.

We have also called for the House to have more control over its own business. Of course, the Government have the right to pursue their legislative agenda according to what has been set out in their manifesto, but that does not mean they should control the whole timetable. It is important to allow MPs proper time to debate. One of the Government's most retrograde parliamentary innovations has been the use of programme motions for every Bill. They have stifled debate and resulted in numerous instances where new clauses and amendments tabled to Bills have simply not been debated; for example, that happened with the recent Equality Bill.

The way in which proposals will be implemented is almost as important as the changes themselves. It is clear that some can be introduced immediately, such as changes to how petitions are presented. However, as the report says, any changes would have to be implemented in stages. That is sensible, and we need to ensure that the implementation of any new Standing Orders does not inhibit the ability of a new Parliament to hit the ground running.

But we should go much further. The Wright Committee was constrained by its terms of reference. Members will of course be aware that much time was wasted at the outset, not least because of changes to the original motion, but that should not stop the process of ensuring that Parliament is reformed further to serve the public better. For example, we would like to see the abolition of wasteful Regional Select Committees, a reduction in the size of the Commons and equalisation of constituency sizes, a vast improvement in the scrutiny of European Union legislation, a cut in the overall cost of politics and a determined effort to resolve the West Lothian question so that only English MPs can vote on wholly English matters. Those and other measures are necessary if we are really to reform Parliament and make its processes and procedures fit for the 21st century.

To conclude, my party has been leading on this matter for some time. We welcome the majority of the proposals in the report, but we must ensure that changes and their implementation are made in an appropriate and achievable way. This is not the end of the line but only a station stop along the track of necessary reform and modernisation. In last week's business questions, several Members spoke of having a full day's debate on the report. I very much hope that this short debate will not constitute a whole day's debate or, indeed, a contribution to it. Moreover, will the Deputy Leader of the House confirm that every effort will be made to ensure that no ministerial statements and the like interfere on the day? Will she also clarify a particular point from last week's business questions, when the Leader of the House spoke of responding to the debate? Will she confirm that there will be a statement, either written or oral, followed by a proper debate?

The Government have asked the Opposition parties for their views on the report. Will the Deputy Leader of the House take my contribution today as our response to the Wright report? We look forward to hearing from the Minister about what the Government's view is on the report. 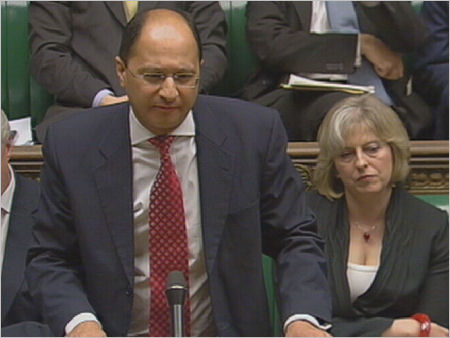