Shailesh Vara MP was very pleased to co-host a cross party Diwali reception in the House of Commons this week along with Navendu Mishra MP and Virendra Sharma MP. 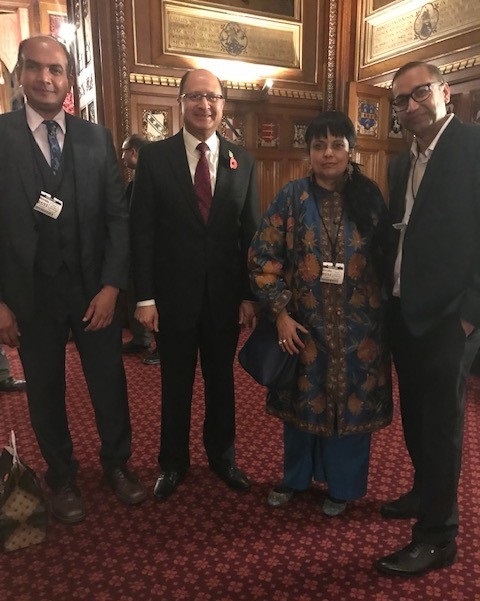 The event took place in the State Rooms of the Speaker’s House and Sir Lindsay Hoyle MP, the Speaker, was the chief guest.

Diwali celebrates the triumph of good over evil, light over darkness and knowledge over ignorance, and is celebrated across the world by nearly a billion people.

The event was attended by a number of Parliamentarians from both the House of Commons and House of Lords along with members of the Hindu, Jain and Sikh communities from across the country.

The event was particularly welcome as the pandemic had prevented any such gatherings last year.

“I was very pleased to co-host this cross party Diwali function in the Speaker’s State Rooms in the House of Commons.

“Diwali is a very important celebration for the Hindu, Jain and Sikh communities as it celebrates the triumph of good over evil and light over darkness.

“I was especially pleased that some local people were able to join me in the Commons for this very important celebration.”

“It was a privilege to attend the Diwali Reception at the State Rooms of the Speaker's House and I thank our local MP Mr Shailesh Vara for the invitation. It was a memorable evening imbued with the spirit of the Diwali Festival which is a time for rejoicing with family and friends.”

“It's amazing to see representation from various political parties coming together to celebrate Diwali to reiterate the common message of unity and working together to eliminate the evil of ignorance with the light of knowledge. The true essence of Diwali.”

“It was indeed a pleasure and a wonderful opportunity to be part of this Diwali reception hosted on a cross party basis. Diwali is the most celebrated festival amongst Hindus, Sikhs, Jains and Newar Buddhists all around the world. Diwali depicts emerging from the shadows and being led back to the light. Good triumphs over evil, truth triumphs over lies, and light triumphs over darkness.”