Shailesh Vara MP welcomed three Coronavirus Community Champions from his constituency of North West Cambridgeshire to a special awards ceremony held in Parliament on Thursday 19 May 2022. 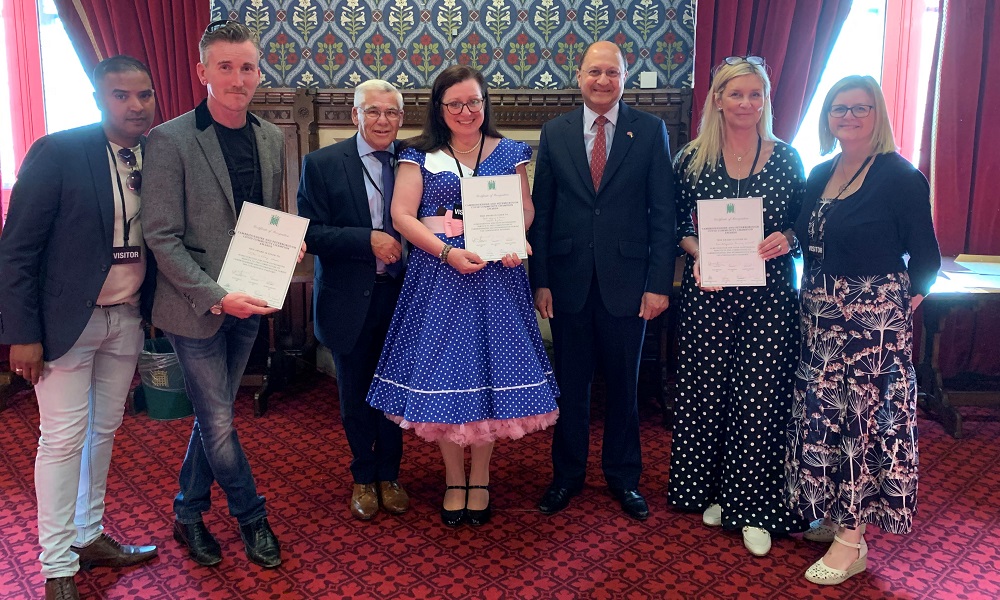 The event was held by all Cambridgeshire MPs, recognising three nominated Champions from each constituency. A message from the Prime Minister to the Champions was played by video.

The ceremony brought together Coronavirus Community Champions from across Cambridgeshire to recognise the efforts of local individuals and organisations where they had provided exceptional support to their community during the pandemic, with nominations received from the public.

Mr Stephen Higgins and Mr Ravi Mathu from Elton Village Stores attended the ceremony and were nominated for making deliveries to vulnerable residents at no extra cost and for ensuring that elderly residents were consistently supported.

Post Office Stores in Abbots Ripton received an award for ensuring that deliveries reached those individuals unable to leave their homes and for providing key updates to the Chairman of the local Parish Council on vulnerable local residents. Mrs Samantha Wardman and Mr Adrian Wardman from Post Office Stores attended the awards ceremony.

Mr Vara welcomed the winners to Parliament and presented each winner with a certificate signed by all Cambridgeshire MPs.

“It was a great pleasure to welcome Community Champions from North West Cambridgeshire to Parliament.

“Throughout the pandemic, I have seen countless acts of selflessness and generosity, with many local individuals and organisations going above and beyond to support their neighbours and communities.

“This awards ceremony is a way of providing just a few of those thoughtful individuals and organisations with recognition for their efforts during this difficult time.

“I would like to warmly congratulate Southfields Primary School, Elton Village Stores, and Post Office Stores in Abbots Ripton on their awards, and I thank them on behalf of North West Cambridgeshire for their outstanding support to our communities.”

“It was an honour to represent the pupils and staff of Southfields Primary School at the Awards Ceremony in Parliament. They all worked exceptionally hard throughout the pandemic, and I’d like to thank Mr Vara for this award which recognises the efforts of the whole school.”

“We really enjoyed our visit to Parliament, and would like to thank Mr Vara for inviting us. The Awards Ceremony was a lovely event, and it was a pleasure to meet other Community Champions from across Cambridgeshire.”

“It was a privilege to be recognised as a Coronavirus Community Champion for North West Cambridgeshire. I’d like to thank Mr Vara for welcoming me to Parliament, and for a very enjoyable evening.”