Shailesh Vara MP recently hosted a meeting between Highways England and representatives from several villages which come off the A14 at dangerous junctions.

The virtual meeting, arranged and chaired by Mr Vara, enabled the villages to put their case to Mr Martin Fellows, Regional Director of Highways England, as to the serious risk to safety which local residents face daily.

Also attending was County and District Councillor Ian Gardener who put the case for the villages and was supported by many of the representatives who gave their own account of the dangers faced by the local community.

Mr Vara is backing the campaign by the villages for work to be undertaken by Highways England, including short term safety measures to be put in place while a more long term solution is considered.

The Mayor of Cambridgeshire and Peterborough, James Palmer, has given his support to the campaign too.

Having listened to the arguments put forward by the villages, Mr Fellows has agreed to Highways England having onsite meetings at various locations which the local community feel are in need of being made safe.

“This was a very constructive meeting and I’m grateful to all those who took the trouble to attend. I am in no doubt that these are dangerous junctions and I am very pleased that Mr Fellows and his team have agreed to engage with the local community.

“The separate onsite meetings at the junctions will help to identify the dangers to be addressed and I know the local community will do all they can to work closely with Highways England.

“I will be keeping a close eye as matters progress.”

“I was very pleased with the constructive nature of the meeting and I am looking forward to working with Shailesh Vara MP and Highways England and the various Parish Councils in getting safety improvements on the A14 between Ellington & Keyston.”

“Our road network is a vital part of everyone’s life and we’ll never stop looking for ways to improve on safety and reliability. Substantial vegetation clearance has already taken place on the A14 over the past year to improve visibility, as well as road markings and signage improves, and we’ll look to continue this work in the future. We always welcome the opportunity to hear first-hand from residents and to discuss any concerns they have, and this meeting with Mr Vara and local residents proved to be very useful.”

“Because of the acknowledged risks associated with the junctions on the A14 road between Titchmarsh and Ellington a meeting was chaired by Mr Shailesh Vara MP. Representatives from County and Parish Councils were present together with Department for Transport and Highways England. Mitigation measures were discussed including speed control, better hazard signage and improved vegetation management. It was agreed that Highways would conduct site visits with respective Parish Councils and then a further meeting in three months’ time to discuss progress”. 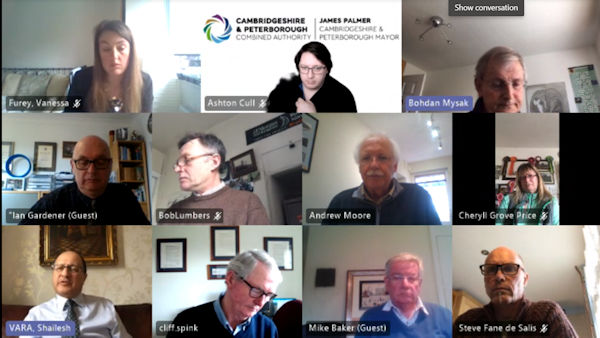